If the chiropractic profession ever wanted an endorsement of the “treat the cause, not the symptoms” approach to health and wellness, it certainly got one – from the medical community, no less, and soon to be heard / seen by millions of consumers – on March 29, 2012 when “The Doctors” filmed at Paramount Studios in Hollywood, Calif. The episode’s theme, “That pain may not be what you think,” featured multiple segments emphasizing that what goes on in one part of the body can affect other parts of the body, and that pain in one area may actually be caused by a problem somewhere else. The episode will air on Monday, April 23. 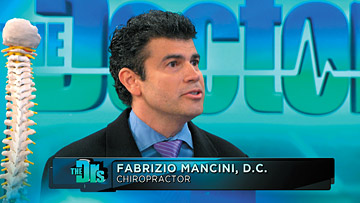 In addition to great sound bites in that regard from several of the show’s MD hosts (“The Doctors,” a spinoff of “Dr. Phil,” features four medical doctors who discuss various health topics), the episode featured another television appearance by Dr. Fabrizio Mancini, president of Parker University. Dr. Mancini, who appeared on the March 14 episode of “Dr. Phil” in a segment discussing chiropractic care and his new book, The Power of Self-Healing, took a different approach with “The Doctors,” videotaping a patient exam and then appearing on-stage with the patient to discuss chiropractic treatment and the patient’s progress.

The video outlined how the female patient went to see Dr. Mancini, complaining of low back pain as her primary symptom. Dr. Mancini evaluated her using multiple assessment methods / devices (several of which he mentioned by name and showed on screen), finding problems in her pelvis, low back, upper back and neck. In addition, he noted that the patient was “putting 50 percent more weight on one foot” compared to the other. Dr. Mancini then was shown adjusting the patient.

As the video concluded, Dr. Mancini and the patient came out on stage to talk to the show’s lead host, Travis Stork, MD. Dr. Mancini said what makes chiropractic unique is that DCs “look for the cause of the problem, not just management of the symptoms,” and outlined how his patient was likely suffering from various stresses contributing to her symptoms. For example, the woman had a busy travel schedule and had suffered a prior accident (physical stress); her diet included too much sugar, which Dr. Mancini said stresses the nervous system and causes inflammation (chemical stress); and the stress of starting a new business was causing tension in her spine (emotional stress). Dr. Stork echoed Dr. Mancini’s point, telling viewers that stress can reflect itself in different areas of pain.

Dr. Mancini also shared that “the body communicates through the nervous system.” As he spoke, images appeared on the screen behind him, showing the spine and suggesting its ability to communicate with the entire body. Dr. Mancini also mentioned that many chiropractors perform adjustments using hand-held manual devices. As he explained how the device corrects misalignments, he demonstrated its use by clicking it several times on a spine model.

The patient herself may have made the most impact on audience members / viewers when Dr. Stork asked her how she was doing. Her enthusiastic response: “I have never felt so good … I feel like I am a new person and I can’t wait to see what will happen going forward.”

All About Chiropractic – Without Even Realizing It?

As mentioned, “That pain might not be what you think” was a recurring theme throughout the show, not just in the chiropractic segment. For example, one segment featured a triathlete who sought treatment for shoulder pain and numbness in his leg, among other symptoms. The man visited a medical doctor, who found he had a “tethered cord” and ultimately corrected it via surgery. The segment reinforced the notion that the site of pain does not always indicate the source. Even more important, viewers heard that a spine problem can cause pain in multiple parts of the body.

In another segment, Dr. Stork spoke with a pharmacist about managing diabetes. Dr. Stork described the two types and talked to a woman in the audience who had just been diagnosed. His advice: “You can do things in your life to help manage diabetes. … [You can] change the way you eat … foods can have a huge impact.” Dr. Stork mentioned specific dietary changes the woman could pursue, including eating more whole grains, fruits and vegetables; and also suggested being more active on a daily basis. From a wellness perspective, viewers learned that there are simple ways to improve your health that don’t require drugs.

When taping concluded, I spoke briefly with Dr. Brian Jensen, a chiropractor who was in the audience for the entire show. Asked to provide his perspective on the episode, he explained that “each of the patients associated with the show could have benefited from chiropractic care … we know that at the very least, any neurological stress inhibits the body from functioning at its highest potential. The gentleman that had the spinal surgery certainly had some postural issues that are a contributing factor to pain and degeneration, and would benefit from a thorough chiropractic evaluation.

“Chiropractic care may have been beneficial to the patient with the heart issue,” he continued, “because we know that subluxation can stimulate the sympathetic nervous system, increasing heart rate and blood pressure, decreasing the efficiency of the heart function. Co-management of cases like this could be very helpful to these patients. [In one of the segments, the doctors talked to a woman who, during pregnancy, had suffered major cardiac complications due to a bacterial infection following a dental procedure. She was at higher risk for complications due to a pre-existing condition.]

“The sinusitis causing tooth pain is another example of a condition that may respond positively to chiropractic adjustments; immune system function improves when the nervous system is balanced, helping the body fight infection.” (This segment provided another big boost for chiropractic when one of the other co-hosts, Dr. Drew Ordon, commented that “there are so many sites of referred pain” in the body. And by the way, the patient’s pain was related to the trigeminal nerve, reinforcing to viewers the role of nerves / the nervous system in pain and dysfunction.)

While Dr. Jensen appreciated the episode’s value in sharing the chiropractic message, he also said, “Sadly, the public does not understand chiropractic much beyond pain relief; hopefully we can continue to explain the neurology of why chiropractic works.” With appearances on “Dr. Phil,” “The Doctors” and “Dr. Oz” (see below) in the past several months, all of which have promoted not only chiropractic itself, but also the whole-body philosophy of health and wellness, DCs are in an ideal position to help more people understand -– and benefit from – chiropractic care.

On March 14, the same day the “Dr. Phil” episode featuring Dr. Mancini aired, another chiropractor made an appearance on daytime television: Dr. Steven Shoshany. For the second time, Dr. Shoshany stopped by “The Dr. Oz Show” to discuss chiropractic and even adjusted a patient live in-studio.

In contrast to “Dr. Phil” and “The Doctors,” host Dr. Mehmet Oz introduced chiropractic in a segment on “controversial back pain treatments.” The segment, “Best Back Pain Solutions, Pt. 2” discussed various potential treatments for back pain, including chiropractic. But despite the cautious tone of the segment, as you’ll see from the following summary of events, Dr. Shoshany – and the patient he adjusted – did an excellent job informing viewers of the benefits of chiropractic care.

Dr. Oz began the chiropractic portion of the segment this way: “Millions of you swear by it, calling it the most successful way to treat your back pain. Yet chiropractors are dismissed by many in the medical community as alternative, unproven, ineffective, [and] little more than a placebo. Yet nearly 60 percent of people suffering from back pain claim they get badly needed relief from chiropractic treatments. Could this hands-on approach to your back pain be better than surgery or steroids?”

Dr. Oz then introduced a woman suffering from chronic back pain of 1 1/2 years’ duration. According to the woman, she had previously gone to a DC for neck pain (which she says helped), and was now considering trying chiropractic again for her back pain. Dr. Oz told her that despite the “controversy” regarding its effectiveness, he thought “it might be worth giving a shot to a chiropractor” and then introduced Dr. Shoshany.

Dr. Oz asked Dr. Shoshany why chiropractic is different from painkillers; he explained that they “don’t address the cause of the systemic problem; they cover it up and mask the symptoms. Chiropractic gets to the root cause of the problem. We’re dealing with spinal balance; when joints become restricted, nerves become irritated, and it can interfere with the body’s ability to heal itself. … When we adjust the spine, the body can work better.”

Dr. Oz asked the woman, “Would you like to give it a shot?” She agreed and lay face-down on an adjusting table in the center of the stage. Dr. Shoshany explained that prior examination had revealed mid-thoracic restrictions and that he would adjust that area of the spine.

As the woman was adjusted, Dr. Oz gasped, “Oh my goodness. Did you hear that?” in response to the audible sound of the adjustment. Dr. Shoshany was quick to state: “It’s really safe, really effective,” and then proceeded to adjust her a second time, this time eliciting a louder popping sound. Dr. Oz repeated his initial reaction, and this time the audience gave a collective groan. Dr. Shoshany said, “It’s as easy as that” as Dr. Oz asked the woman if she was alright; to which she immediately replied, “It feels really good, actually.”

Following the adjustments, Dr. Oz asked Dr. Shoshany what tips he offers patients for avoiding back pain; Dr. Shoshany suggested core strengthening, stretching, adequate hydration, and movement (avoiding sitting for long periods of time, which he said “puts a lot of pressure on your back”). Dr. Oz emphasized that keeping strong posture throughout the day is important.

Tempering Dr. Oz’s reaction to chiropractic on the March 14 episode is the following statement posted on the show’s Web site: “Over time, chiropractic treatments for back pain may make a difference and are just as effective as pain medication. The difference, however, is that painkillers don’t eliminate the problem – they just cover up the symptoms, whereas, spinal realignment, which forms the foundation of chiropractic care, can get to the root cause and fix an irritated nerve.”

Dr. Shoshany first appeared on “The Dr. Oz Show” on March 3, 2011, discussing the advantages of chiropractic treatment vs. surgery and prescription medication when managing pain. He also adjusted Dr. Oz’s “assistant of the day,” delivering both a side-lying and a prone adjustment.